By Marzcanna,
April 25 in General Discussion

That discussion is on for decades 😁 I make it more simple. The better you can dial in your strain to your fertilizer, light, climate, counts more compared to what medium or fertilizer you use... 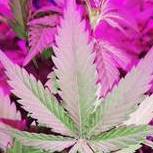 i dono man... the plants uptake synthetic nutes in the exact same way organic nutes are taken up...  the plant doesnt see organic nutes and be all like ...mmmm theres mollases in this, or mmmm gr

There definitely is a global shift towards a more sustainable approach and it really doesn't have to include finger pointing or forcing people to change their ways of getting a desired outcome. I do n